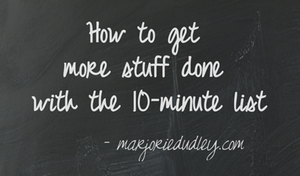 You can’t make more time–I’ve tried–but you can use the time you have a little bit better.

I’ve talked about Power Hours many times before. In my opinion, it’s the single best way to maintain a high level of consistent achievement. But how do you get their if you are falling into the procrastination doom-spiral?

I’m one of those people who tends to freeze when I feel overwhelmed. If something feels daunting, then better to take my mind off the problem altogether with mind-numbing social media or by binge-watching Netflix than to face and solve the problem. This is my nature, my default state.

This is a problem for me—or it can be if I don’t address it.

Well, now I have a new way to address it. Not so much new as in different, but new and improved. Like ketchup or something, it’s already kickass but it’s now kickass-ier, with real sugar or non-GMO tomatoes or whatever.

Back to making Power Hours more kickass-ier. As I have talked about before, I traditionally recommend Power Hours in three blocks of 20-minute segments, two times per day, for a total of six segments. This works for a lot of reasons I have mentioned so I won’t rehash.

The problem is it doesn’t work for the person, also like me sometimes, who is feeling overwhelmed, feeling like the goal is too big or frankly just not feeling like doing it.

(I know I shouldn’t admit that there are lots of times I just don’t feel like doing something.  I know there are people out there who haven’t had an out-of-discipline experience, but frankly, I’m not talking to those people—or if I am it’s to help them understand the people like me who don’t come perpetually disciplined. This is for the rest of the worthwhile, talented individuals who occasionally struggle with motivation, and those who lead them.) 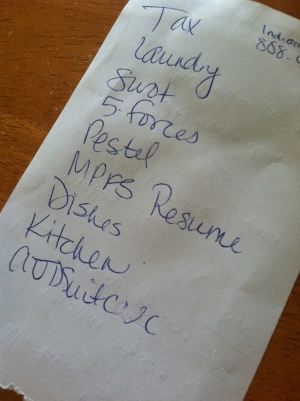 Ya, dishes and laundry are the domestic hot-potato in my home. #Embarrassing

So, again, back to making Power Hours more kickass-ier. Here is my list, here is one sliver of one fraction of what I need to do today. I have been procrastinating on my taxes, well, for months now. I know it’s a job that’ll probably take me a couple hours. Laundry, that’s just a given at my house. There is never a time laundry doesn’t need to be done. The next three are for a consulting project I am working on; it’s a fairly substantial project about to take 50-plus hours. I have got about five in, and would likely leave the last 40 or so for the weekend before the deadline… if it weren’t for this trick.

No magic. No brain-surgery. No super-human powers or Spidey-sense required.

That’s all that needs to be done: A list of important task somewhere between not-overly-simple and not-overly-complex and the acceptance of only subjecting yourself to that “horror” for 10-minutes. Allow the feeling of accomplishment sink in. Lather, rinse, repeat. Or don’t. But do bask in the feely-good-feelings of getting that list out of the way.

If you want to take it to the next level as I will with my “Tax” item, which obviously is more than a 10-minute endeavor (although I spent 20 or more), you can break it out further next time. So my list for tomorrow will say “Receipts”, “Donations”, “Mileage” as these are the next steps that I identified missing from my pile-o-taxes today. But headed into today, I didn’t even know what I had gathered and what was missing. And I wasn’t making any progress starting to look for it.

The 10-minute list trick gave me the motivation to start with the peace of knowing I could stop.

I believe that’s part of the psychology of procrastination and fear. We procrastinators build up in our heads—some based on reality, some not-so-much—the pain that doing something is going to cause. Scenarios like “It’s going to take forever”, “it’s so horrible” and the like pervade our consciousness until that’s all we can see making the whole project much more daunting than it really is.

That’s why the 10-minute rule works: because even the most wildly abusive torture can be endured for 10-minutes. And then usually in that time we realize it wasn’t that hard or horrible. And once we are at that point we are already victorious. Regardless of if it was or it wasn’t, we have accomplished more than we would have had we not started.

What’s been haunting the back of your mind for some weeks now? What tasks and goals can you chip away with today by using the 10-minute list?